Unlocking the Power of Data Visualization with the 6 Gestalt Principles

In data visualization design, figure/ground organization is an important principle that deals with how different elements of a graphic relate to each other. This principle is used to create visual aids with greater clarity and impact, such as maps, charts, and graphs.

An example of this principle in action is the use of colour contrast. By choosing colours that stand out against each other, the designer can create a more visually striking graphic, particularly when representing population density on a map. Using bright colours for highly populated states and more muted colours for less populated states can help the viewer easily understand the population density at a glance.

In addition to colour contrast, figure/ground organization also involves taking into account size relationships within visuals. For example, make sure that text is legible even when small and that objects have enough space not to crowd each other. Furthermore, the principle also includes considering how elements in a visual may appear on different devices. Making sure text remains readable on desktop, and mobile screens are crucial for a successful figure/ground organization.

In conclusion, figure/ground organization is a critical consideration when creating effective data visualizations. By carefully thinking about how objects appear in relation to each other, designers can create graphics that are easy to understand and visually striking, regardless of the device they are viewed on.

When creating data visualizations, using the principle of similarity can be a powerful tool for highlighting patterns and relationships between different elements. This is achieved by grouping elements in a visual according to their similarities, making it easier for viewers to understand the data.

For example, to show the population growth of various countries over time, using similar coloured lines for each country to indicate their growth rates, can help the viewer quickly compare the growth rates of each country without being distracted by unrelated elements. Furthermore, incorporating text labels into the visualization can further differentiate between the elements and make it even easier for the viewers to understand patterns.

However, it is important to note that in order to make the similarity effective, designers need to create consistent groupings; having too many disparate elements within one group can actually detract from clarity rather than enhance it. Also, defining well-defined groups of related data points, it will help viewers recognize patterns more quickly and easily.

In summary, incorporating similarity into data visualizations can be an efficient way to help the viewers identify trends and relationships between elements quickly and easily, making it much more understandable for the audience.

Proximity is a critical principle in data visualization design, it deals with how elements are positioned and grouped together in a visual. This principle helps viewers to quickly differentiate between related and unrelated elements by grouping elements that are close together and separating those that are farther apart.

For instance, when comparing trends in employment rates across different countries, separating each country’s trend line with a small gap to make them stand out from one another more clearly will be more effective. Additionally, when illustrating the number of daily visitors to different attractions in a city, grouping the attractions according to their geographical location by placing them closer together on the visual will help viewers understand that these attractions are located near each other.

In conclusion, proximity plays a vital role in data visualization design. By positioning and grouping elements correctly, designers can create visuals with maximum impact and clarity, and it will help viewers identify patterns or relationships between different elements quickly and easily. This makes data visualizations more powerful and more effective.

Continuity is an essential principle when creating data visualizations, it states that elements in a visual should be arranged in such a way that they form a continuous line or curve, rather than individual points. This helps viewers to perceive the relationships between different elements quickly and easily.

For example, when illustrating the number of new customers acquired by a business over a period of time, using a continuous line graph instead of individual points can help viewers recognize any changes quickly and easily. Continuity can also be used to spot correlations between different sets of data. For instance, using a dual-axis graph with two lines representing different datasets (e.g., customer growth vs revenue growth), viewers would be able to identify a correlation between these variables at a glance.

In addition to representing data sets, continuity can also be used to emphasize certain elements within a visual. For example, a curved arrow can be used to highlight an important change in trend. This helps draw attention to specific parts of a visual without detracting from other elements, making it more impactful and clear.

In summary, continuity is a powerful tool in data visualization design. By incorporating curves or lines into visualizations, designers can help viewers spot patterns or recognize correlations quickly and easily, this makes their data visualizations more effective. Additionally, using continuity to emphasize certain elements in a visual can also be an effective way to highlight specific information without detracting from the rest of the visual.

Symmetry is a significant principle in data visualization design as it allows designers to create visuals that are balanced, harmonious and easily recognizable by viewers. By applying symmetry, designers can arrange elements in a way that is pleasing to the eye and allows viewers to quickly spot patterns and correlations in the data.

For instance, when illustrating the population growth of a city over a period of time, using two vertically aligned graphs (with the same axes) can help viewers to quickly recognize any changes in trends. This is because symmetry creates a visual balance, which makes it easier for viewers to identify similar elements across different visuals. Furthermore, symmetry can also be used to draw attention to specific areas within the visualization and make it more impactful and clear.

Apart from standard visuals, symmetry can also be used to emphasize certain elements within a data visualization. For example, representing customer feedback in an abstract shape with four individual sections arranged symmetrically can help focus viewer attention on each section separately, and make the overall visual more aesthetically pleasing. Similarly, placing key information inside a closed frame or shape with a symmetrical layout can help draw focus on specific parts of the visual without detracting from other elements, making it more impactful and clear.

In conclusion, symmetry is an important principle in data visualization design. It allows designers to create visuals that are balanced, harmonious, and easily recognizable, which enables viewers to quickly spot patterns and correlations. By applying symmetry correctly, designers can create visuals that are aesthetically pleasing and impactful while emphasizing the most important aspects of their data sets. Additionally, using symmetry in a way that focuses viewer attention on specific parts of the visualization without detracting from other elements can make data visualization even more effective.

Closure is a critical principle in data visualization design, it involves arranging elements in such a way that viewers perceive them as a single recognizable unit. This helps viewers quickly and easily recognize patterns or relationships between different elements.

For example, illustrating the total number of crimes committed in a city over the past year using a pie chart allows viewers to recognize the proportion of each crime type without mentally adding up individual pieces. Also, using closure can make visualizations more aesthetically pleasing and memorable. For instance, representing different types of customers at a business using an abstract shape which symbolizes each type, would be more visually appealing and easy to remember than using individual icons.

Apart from standard visuals, closure can also be used to emphasize certain elements within a data visualization, by placing key information inside a closed frame or shape (e.g., highlighting an important trend with an arrow inside a box). This helps focus viewer attention on specific parts of the visual without detracting from other elements making it more impactful and clear.

In conclusion, closure is an important tool in data visualization design, it helps to create visuals that are clear and impactful by arranging elements in such a way that they form a single recognizable unit. Using closure correctly can help viewers spot patterns or recognize correlations quickly and easily, making data visualizations more powerful. Incorporating shapes or frames in visualization and emphasizing particular elements within them also helps in making it more effective.

In conclusion, using gestalt principles such as figure/ground organization, similarity, proximity, continuity, and closure can be incredibly helpful when designing effective visuals for conveying information. By understanding and applying these principles, designers can create visuals that are more impactful and clear, helping viewers to quickly and easily understand the data presented.

It is important to note that when using these principles, designers should be mindful of creating consistent groupings, as well as considering how elements may appear on different devices. By using gestalt principles correctly, designers can create visuals that are not only aesthetically pleasing but also easily understandable for the audience.

In a nutshell, gestalt principles provide a framework for creating effective data visualizations that are clear, impactful and easy to understand, it helps the designer to make informed decisions when designing a visual, and the viewer to understand the information better. It’s a powerful set of tools that can be used to enhance the effectiveness and impact of any data visualization. 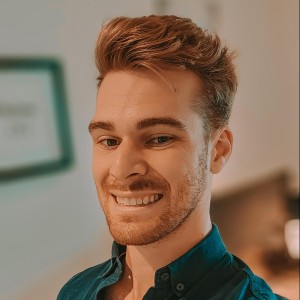 Hi, I'm Louis-Philippe Bossé. I'm the president of Sunny Experience and SunMove. And if you wonder why both companies have the word "Sun" in them, it's because I'm nicknamed Sunshine. I'm nicknamed Sunshine because I always try to see the positive side of things and because I look like a guy in a movie with this nickname. I'm also a bit of a fitness enthusiast. I love going to the gym, playing sports, and keeping active. It's all about feeling good and being healthy!
All publications

What Are Database Cloud Building Block Technologies for SMEs?

Databases are essential to the modern world. They store the data that we use every day for work. But what if you could make your

The goal of a user experience designer is to make products as easy and frictionless as possible. However, there are times when adding difficulty serves

Remote Work and the Tools We Recommend

The number of people working remotely is on the rise. A recent study found that 43 percent of U.S. employees worked from home at least

Let’s light up your daily experience